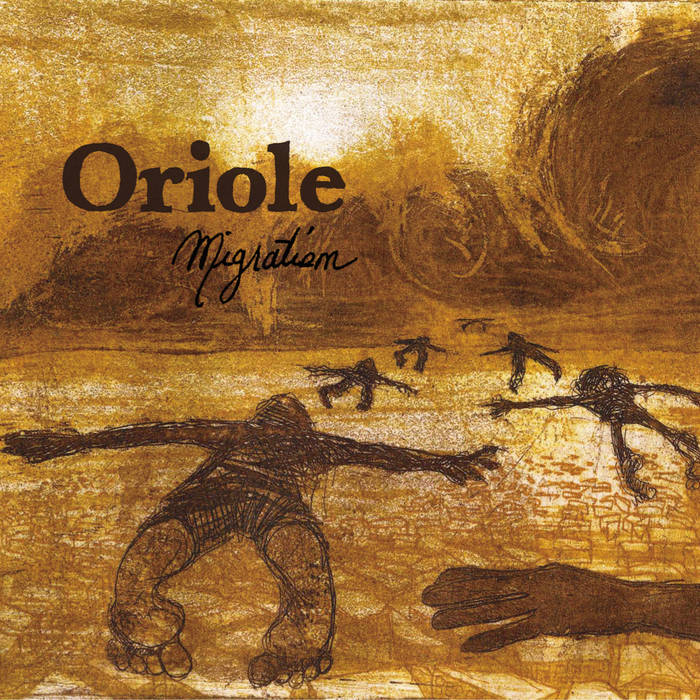 
Migration is Oriole’s second album, a sensory banquet of soaring melodies, colourful South American folklore, lively dances and emotional ballads of longing. Music that creates a rich, emotionally disquieting world that is at once familiar and dreamlike. A world of freedom, of movement, of dusty roads and traveling musicians in shaded market squares whose journey will never end. These are songs of magical realism mingling elements of fantasy, myth, desire and wanderlust in renderings that blur traditional distinctions between what is serious or trivial, melancholic or joyous.

“The magical realist does not try to copy the surrounding reality or to wound it but to seize the mystery that breathes
behind things”
Luis Leal, Magical Realism in Spanish American Literature

Oriole’s composer and guitarist Jonny Phillips was described by The Guardian as “A big new composing presence” and Time Out as “the brilliant F-IRE collective guitarist” on the release of the first Oriole album Song for the Sleeping in 2005. He has travelled widely blending the musical, folkloric and dance traditions of North Brazil, West Africa, Southern Europe and beyond. These influences have been as important as the folkloric music of his own region and the church music of his composer parents. Here both the migrations of the composer and the band members have resulted in the creation of new musical hybrids; the physical and artistic travels being inseparable.
Oriole received enthusiastic reviews last year for live performances at venues such as The Purcell Room, South Bank Centre in London. Migration’s release will be accompanied by a 15 date nationwide tour that will include Cheltenham Jazz Festival as Jerwood rising stars.

Jonny Phillips – Acoustic Guitar
Jonny was born in 1971 at the end of deserted moorland in the north of England. His first instrument was violin;
when he was 15 he took up the guitar. Critics have hailed his beguiling, cinematic songs as "gentle beautiful
music that is surprisingly affecting". Jonny is also a guitarist and co-composer for Julia Biel and is guitarist for
The Soothsayers.
He is a member of the F-IRE Collective.

Ingrid Laubrock – Tenor saxophone
Ingrid has her own quintet and co-founded Monica Vasconcelos’ Nois. In 2005 she was nominated for the
rising star category of the BBC Jazz Awards. She received the Fellowship in Jazz Composition from The Arts
Foundation in 2006.

Sebastian Rochford – Drums
Winner of the best band at the BBC Jazz Awards, Nominated for the 2005 Mercury Award and plays drums for
Acoustic Ladyland, Yoko Ono and has his own band Polar Bear.

Anders Christensen – Electric Bass.
Born in Denmark, Anders played in Paul Motions electric bebop band for the last ten years and is now touring
the world with The Ravonettes.

Julia Biel – Vocals
Julia won the Perrier Jazz Award; she is a member of the F-IRE collective and last year released her own album “Not Alone” featuring collaborations with Jonny Phillips.

Okou – Vocals
From the Ivory Coast, sings backing vocals for Mick Jagger, Keziah Jones and is featured vocalist with the
Four Corners Quintet alongside Mark Murphy.

Guillermo Rozenthuler - Vocals
Guillermo now performs in the UK with his own tango quintet after a more than a decade
performing the length and breadth of South America. He also performs in Gilad Atzmons’ group.

Oriole undertakes a musical journey through parched landscapes influenced by the Iberian peninsular where their composer spent the last few years performing with Spanish, Portuguese and Cuban musicians. This music is warm, not only in its Latin rhythms and alto tonalities but also in the musical interplay of these long-time musical friends.

Bandcamp Daily  your guide to the world of Bandcamp